The designation of the Magaliesberg Biosphere gives the region international status and has the potential to stimulate genuinely sustainable development, encourage responsible tourism and present the region positively to the world. It will inspire research and education and facilitate collaboration, recognition and funding. Above all it will be a place where all South Africans can celebrate with pride the immense antiquity, enthralling biodiversity and rich history of our shared inheritance.

MCSA members have served, and still serve, on the UIAA Access Commission and the UIAA Mountain Protection Commission. 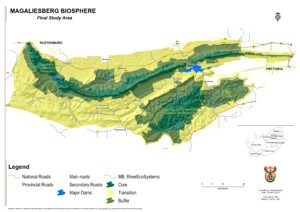 MCSA OFFICE IS CLOSED TO THE PUBLIC DUE TO COVID-19, BUT IS FUNCTIONAL. NO FORMAL MEETS ARE BEING ORGANISED.